South Africa has more than twenty enchanting national parks, each with its own distinctly magical natural elements. These national parks stretch from the southern tip of the continent to the game-rich areas of the northern and northeastern parts of the country.

The internationally acclaimed Kruger National Park is considered to be the crown jewel of South Africa's national parks. The park boasts an impressive 2 million hectares teeming with many mammals, birds, and reptiles. One hundred forty-seven different mammal species call Kruger home, as do 507 unique bird species. Nowhere else in Southern Africa will you find the unparalleled diversity of species, landscapes, and accommodation options.

Located in KwaZulu-Natal, the Hluhluwe-iMfolozi Game Reserve is home to the Big Five and exceptionally high numbers of white rhinos. The park was home to Operation Rhino in the 1950s and '60s, and many of Southern Africa's current white rhino populations can be traced back to Hluhluwe. Established in 1895, Hluhluwe-iMfolozi is the oldest proclaimed nature reserve on the continent.

The reserve ranks as the third largest national park in South Africa, home to over 500 elephants and a wide diversity of other wildlife, including black rhinos, spotted hyenas, and leopards. Addo currently stretches over 180 000 hectares (444 700 acres) and is a low-risk malaria area, making it ideal for families traveling with small children.

Ithala Game Reserve is rich in wildlife and offers a rewarding game-viewing experience. Interesting flora, such as red Pride of De Kaap flowers, spread over the Ngotshe Mountains and Phongolo River valley. Ithala is known for its high concentration of giraffes and the KwaZulu-Natal province's only breeding herd of tsessebe.

The Knysna Lakes area forms part of the Garden Route, arguably the most picturesque stretch of South Africa's coastline. The region is rich in biodiversity and offers many unique locations, from dense forests to unspoiled beaches and sparkling lakes. Popular activities include a deluge of watersports, hiking trails, birding, and mountain biking. Keen birders will delight in sightings of the colorful Knysna Turaco.

The national parks of South Africa are well-managed, and each serves to protect a unique part of the country with different mammal, plant, and bird species that are natural inhabitants in the area. Re-introduction programs have contributed significantly to re-establishing specific species in areas where they had become endangered.

The white rhino was saved from the brink of extinction in the Hluhluwe-iMfolozi National Park. It is one of the greatest success stories in recent times of how effective wildlife management in the national parks of a country can ensure that we do not deprive future generations of some of the most magnificent mammals in the world.

These parks might not be as well known as some of the more illustrious conservation areas in the country. Each, however, offers the opportunity for an enriching adventure in the natural world.

The park's main attraction is undoubtedly the thundering 56m Augrabies Falls, which the Khoi called 'the great noise.' Besides the falls, which form part of the immense Orange River Gorge, the park boasts many other unique sights, including fascinating geological formations like Moon Rock and the Swart Rant. Though the park is not known for its wildlife, dassies (rock hyrax) and klipspringer enjoy frequenting the rocky, arid landscape.

The picturesque Bontebok National Park park is situated in the Cape floral region under the imposing gaze of the Langeberg Mountains. It is full of various plant, animal, and bird species. The park was established to protect the bontebok, which faced extinction in the 1800s. From the original 17 bontebok, the park is now home to approximately 200 of the 3000-strong global estimate.

The park is located in the Eastern Cape within the uniquely beautiful region of the Karoo. The vast, arid landscape surrounds the sleepy town of Graaff-Reinet and includes the Valley of Desolation, with its giant, towering dolerite pillars. A variety of activities are available to visitors, from boating on the Nqweba Dam to scenic hiking trails.

Found in the Maluti Mountains of the northeastern Free State, Golden Gate National Park is characterized by striking sandstone rock formations that display magnificent golden hues when bathed in sunlight, most notably the Brandwag Buttress. Black wildebeest, eland, blesbok, oribi, springbok, and Burchell's zebra roam this stunning landscape, while rare bird species like the bearded vulture and bald ibis own the skies.

This boundless semi-desert region is known for the vast diversity of life that ekes out a living and survives in this harsh environment. Recently, many species have been reintroduced that used to occur here naturally, including lion, brown hyena, and Cape mountain zebra. South Africa's national animal, the springbok, is quite common throughout the park.

The park shares its borders with Botswana and Zimbabwe, making it part of the Greater Mapungubwe Transfrontier Conservation Area. Its collection of archaeological treasures has also earned it UNESCO World Heritage Site status. Mapungubwe Hill marks the remnants of an Iron Age African civilization that once prospered here. Elephant, giraffe, white rhino, eland, gemsbok, and numerous other antelope species occur in the area.

Marakele National Park lies deep within the captivating Waterberg Mountains. The park is remarkably diverse in wildlife due to its location, habitat, and climate. Marakele also plays sanctuary to the largest colony of endangered Cape vultures. Elephant, rhino, lion and leopard roam this malaria-free reserve, known for its particularly handsome kudu population. In addition to basic park accommodation, luxury lodges have recently emerged across this magical landscape.

This Eden in northern Zululand is bordered by and named for the Mkhuze River on the eastern slopes of the Lebombo Mountains. The habitats, which include wetlands, woodlands, riverine forests, and swamps, make this region a bird-watching paradise. The 40 000 ha reserve also forms part of the Greater iSimangaliso Wetland Park. Mammals frequently encountered include black and white rhinoceros, elephant, giraffe, nyala, blue wildebeest, warthog, eland, hippo, impala, kudu and other smaller antelope.

Traveling to South Africa means you are spoiled for choice regarding the array of activities available. Adventurous souls will relish the opportunity to push themselves to the limit, while the leisurely at heart may repose on the country's fine beaches or explore sites of historical intrigue. 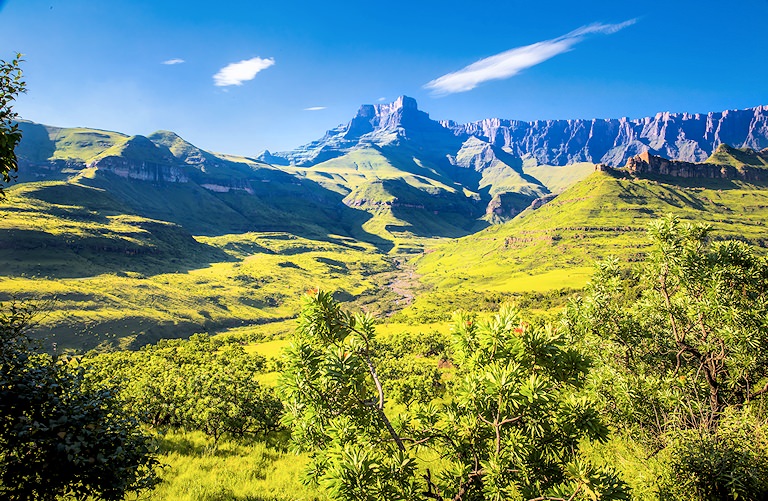 Vast sandy plains, dolerite hills, and semi-desert terrain provide the setting for one of South Africa's newest additions to its family of national parks. The park boasts various indigenous plant species, such as the culturally valuable camelthorn tree. Situated south of Kimberley's historic Northern Cape mining town, Mokala is named for the camelthorn tree that sprouts across its koppieveld and sandy, open plains.

Twenty-eight thousand hectares in the Eastern Cape make up this scenic sanctuary for an assorted collection of wild animals, most notably the once-threatened Cape mountain zebra, which is now flourishing due to concerted conservation efforts. Today more than 700 Cape mountain zebras enjoy refuge in the park. Other endangered species thriving include black rhino and cheetah – the only major predator that occurs here.

The park forms part of Namaqualand, a semi-desert area in the succulent Karoo biome. With the advent of spring, this ordinarily arid region undergoes a fairy tale transformation into a sea of color with a dazzling display of flowering plant species. Remarkably, more than 1 000 of its estimated 3 500 plant species are found nowhere else on earth.

Extraordinary arid landscapes unfold in the Tankwa desert of the Northern Cape. This vast, flat park is one of the finest destinations in South Africa for stargazing. Though wildlife occurs far and in between, sightings of springbok, gemsbok, and red hartebeest are frequent, as encounters with reptiles like tortoises and skinks. The park is situated within the Succulent Karoo Biome, one of the 25 richest and most threatened reservoirs of plant and animal life on earth.

Pilanesberg is a unique national park less than two hours' drive from the major cities of Pretoria and Johannesburg - making it a popular weekend getaway. It adjoins Sun City and is home to all of Africa's legendary Big 5.

The coastal national parks of South Africa conserve stretches of the country's magnificent coastline. These parks extend into the ocean to protect the rich marine life of parts of the Indian and Atlantic Oceans.

This beautiful coastal park lies on the Southernmost tip of Africa, where the Indian and Atlantic oceans meet. Known as the "Cape of Storms," these treacherous waters are responsible for many shipwrecks in centuries past. In season, visitors may be spoiled with Southern Right whale sightings. Visitors to Agulhas can spot the African Black Oystercatcher year-round.

This picturesque protected area forms part of the Garden Route National Park. The acclaimed region is known for its rugged, untouched coastline, lush indigenous forests, and hiking trails, most notably the Otter Trail. Various species of dolphins and whales are often spotted from the shore, while the forested trails host many lesser mammals like badgers, genet, mongoose, and even African wild cat.

The West Coast National Park is a World Ramsar Site widely celebrated for the wetland bird species that migrate to the area. The Geelbek Hide is a popular spot to observe rare lagoon waders. Immaculate beaches, flower-covered fields, and the crystal-clear waters of the Langebaan Lagoon provide stunning scenery. As in Namaqua, the flower season flourishes between August and September.

The Cape Peninsula is considered to be one of the most beautiful natural locations in South Africa. Table Mountain National Park incorporates various peninsula stretches comprising scenic hiking trails, pristine beaches, and incredible wildlife encounters. It is also home to the world's smallest yet most diverse floral kingdom. Table Mountain National Park encompasses popular sites like Cape Point and the Cape of Good Hope Nature Reserve. 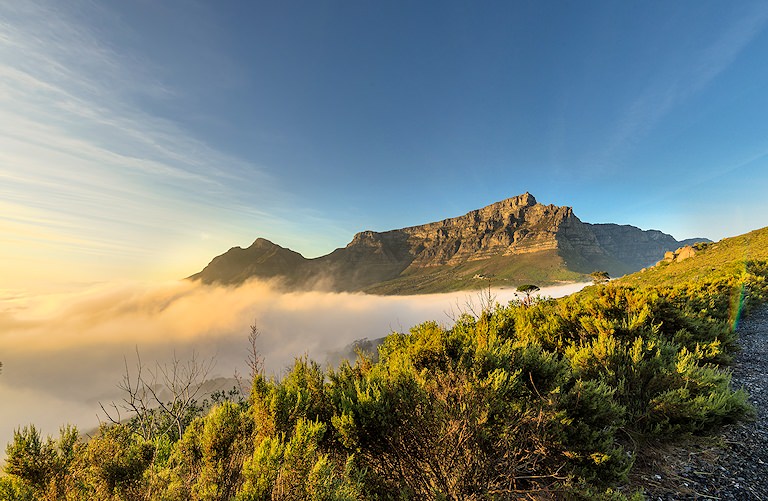