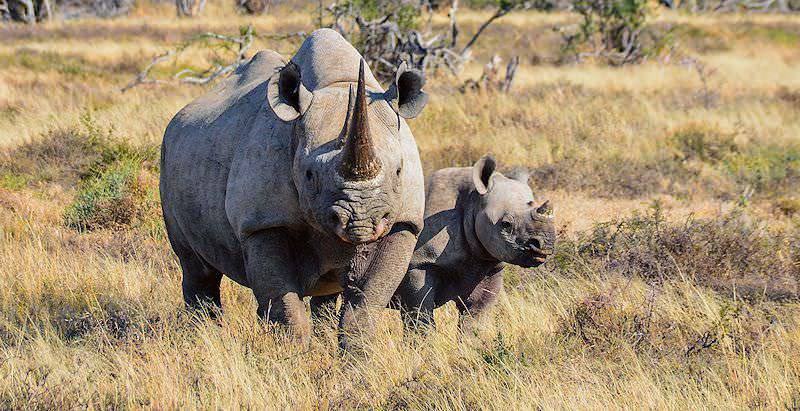 The black rhino is an imposing, aggressive species of mammal that forms part of Africa's Big Five.

Black rhinos are a darker grey color than their African cousins, the white rhino, with a more muscular, stocky build and slightly larger horns on the front of their face. They are, however, smaller in size, with average weight ranges from 1 – 1.35 tonnes (2200 – 2980 lb) for males, and roughly the same size for females – average weights between 900kg and 1.25 tonnes (1985 – 2755lb). They are browsers, or leaf-eaters, unlike white rhinos that are predominantly grazers, or grass-eaters. As a result, black rhinos have a characteristic hooked lip more suited to eating leaves, a defining characteristic that makes it easy to distinguish the black rhino from the white rhino.

Black rhinos were once widely spread throughout Africa and even parts of Arabia and Asia, but face extinction scares in many of its former homelands as a result of, amongst other things, poaching. In Southern Africa, they can only be found within the Kruger National Park, parts of Namibia and national parks in the KwaZulu-Natal Province – most notably the Hluhluwe-iMfolozi National Park. Localized areas of central, untouched rain forest in the Democratic Republic of the Congo are also home to a few crashes, or groups, of black rhino that were able to avoid humans as far as possible up to now. Protected areas in Tanzania, Kenya, Sudan and the outskirts of the Sahara Desert are also still home to a few black rhino individuals, though not in the numbers the same numbers as a hundred years or so ago.

These herbivores were once the most prolific of all the rhino species, but have fallen victim to the inescapable grasp of humans over the past half a century. The drop in their population has become more severe since 2001, mainly due to a rise in poaching and illegal rhino horn trade. Today, there are as few as 5500 individuals left in the wild. Each year for the past three years close to 1 000 rhinos have been killed due to poaching, with the majority being black rhinos, largely because of the superior size of their horns. Conservation efforts in recent years have, however, yielded promising results that could serve as a silver lining for those looking for some hope in the distance. Parks in KwaZulu-Natal in South Africa have had steady growth rates amongst their black rhino populations in recent years bringing back memories of the pioneering efforts of this region in white rhino conservation some 20 or so years ago.

Black rhinos adapt well to a number of habitats, provided there are lots of woody plants, trees and large bushes – they are browsers by nature and thus only eat leaves and fruit. Apart from this, there is little else they require and any forest or dense woodland area is a perfect living environment for the black rhino – this is partly why they still have populations in the rain forests of the Congo, and the Kruger National Park, two environments one would expect to sustain completely different groups of animals. Black rhinos have preferences for certain shrubs, but are able to consume over 200 species of plants, making them very diverse browsers and further able to adapt to many environments.

Females usually form small crashes with home ranges rather than strict territories, while males are typically solitary and very territorial. Often, however, black rhinos seem more solitary than they actually are because of their small population, and are actually similar to white rhinos in their social organization. Mothers and calves usually live apart from a crash, but juvenile male or female rhinos rejected by their own parents have been recorded living with such a mother and calf if the mother is willing to allow it. Furthermore, black rhinos usually socialize or meet up at water holes or dams. In one of the only encounters I have had with black rhinos, they gathered around a waterhole near a rest camp in the Etosha National Park of Namibia at night, around 8 of them, cooling off together.

Their daily lives rarely consist of any other goals than survival, meaning that they mostly just eat or find food and sleep. They are most active early in the day and late in the afternoon – like the majority of herbivores. They enjoy mud baths and rubbing their backs against big trees, both of which help them to maintain healthy skins through a kind of "rhino exfoliation". Males may battle over territory, or when there is a mate to be won over in disputed territory, but largely keep to themselves in most other respects. Male black rhinos do, however, mark their territories by spraying urine or feces at the edges of their respective territories, signaling to any passers-by through the scent signature unique to every rhino individual.

Black rhinos reproduce at any time of the year when a female is found to be ovulating. The male detects that a female is ready to mate by her urine and the scent she leaves behind. He usually approaches her, nudging or charging at her and then spraying urine or calling out to her as he attempts to get her attention. The female's typical response may seem quite violent – she attacks him or squeals – but this is all part of the process for rhinos. Thereafter, they may mate in regular intervals, as the male stays with the female for the next few weeks, before resuming a solitary existence. Male rhinos reach sexual maturity around 10 years of age and females around 7 years. After they have successfully bred, the rhino cow will give birth to a single calf some 15 – 16 months later, and look after it for the next 2 to 4 years as it learns to be independent.

When threatened by predators, black rhinos usually snort, puff or act like they are going to charge at the threat. When they have calves with them, however, black rhinos will typically skip the bluffing and really charge at a predator or threat. Black rhinos are usually not bothered by predators because of their size, but lions may threaten calves when food supplies are running or low or most other animals have left the area for the dry season. Black rhino calves also typically run behind their mothers, unlike white rhino calves. This is mainly because black rhinos call denser woodland areas home where visibility is reduced. As a result, mothers run in front to lead the way, with their calves following closely. These-days, poachers pose the greatest threat to black rhinos, a threat they have had little time to adapt to and have little resistance against, especially when these criminals use large caliber rifles.

South Africa is an alluring destination offering a wealth of adventures.

Namibia is where the fiery Namib Desert meets the frigid Atlantic.

Travel to Zimbabwe for the most breathtaking perspective of the Victoria Falls.

Mozambique is revered for its stunning beaches and well-preserved coral reefs.

Cape Town is one of the continent's most beloved cities, revered for its cosmopolitan atmosphere and natural beauty.