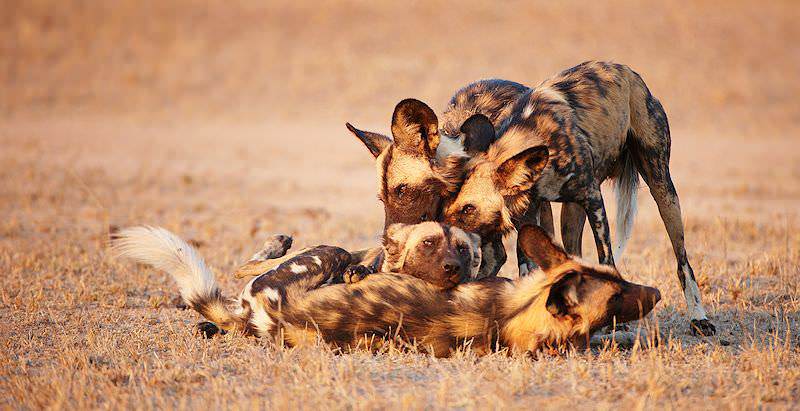 The critically endangered African wild dog is one of the continent's most prolific predators.

Wild dogs are the only wild African canines that predominantly hunt for food. They have a very unique fur pattern that covers their body, with beautiful shades of brown, white, black and tan that resembles a painted canvas – giving rise to the popular name "painted dog". They typically weigh between 20 and 25kg among both sexes, roughly the same size as a Labrador retriever. They are taller off the ground than one might think, but their lean build contributes to them being quite light weight, helping them maintain high speeds for very long distances without expending too much energy – a key part of their hunting strategy.

The range of the wild dog's distribution has greatly decreased over the past decades. They were once found throughout the continent, however, today their small populations have been pressed back into scattered areas of southern and eastern Africa, in protected regions of central Botswana, South Africa, Tanzania, Kenya, Cameroon and equatorial Africa. The Kruger National park and Hluhluwe-Imfolozi National Park are two of their last strongholds in southern Africa, despite some privately owned game farms boasting one or two wild dog packs on the property as well. They mainly call grassland and open woodland areas home, where their hunting strategy can be better coordinated and their vision of prey is unobstructed.

Many of Africa’s carnivores have been threatened by increasing habitat loss, the decrease in prey populations and over-hunting. The wild dog has been hit hardest, with as few as 3000 to 5000 wild dogs left in the wild. They are one of the most heavily endangered species in the world and will continue to decrease from their already depleted populations if large-scale action is not taken. Many conservation programs are in the process of helping the species find their feet again and get off this slippery slope to extinction. The Kruger National Park management and conservation projects are part of this struggle. The main reasons behind the species' current survival struggle are habitat loss resulting in conflict with humans, and infectious disease. Many diseases can easily spread from domesticated dogs to wild dogs, a key factor few may have heard of that has been behind the drastic decrease in wild dog populations. In addition, the loss of their natural habitat has driven many packs to hunt domesticated animals in towns and villages near unfenced protected areas, leading some local farmers to kill them to protect their livestock.

Wild dogs are very unbothered by the vegetation and climate of the habitat in which they live – they go wherever their search for prey leads them. Open grassland plains usually have the largest supply of antelope at around 50kg in weight, a comfortable size for wild dogs, and so most recorded wild dog hunting takes place here. The added challenge where there is lots of prey though, is the fact that there is also lots of competition for prey. Lions and hyenas often overpower wild dogs shortly after a kill has been made, leaving wild dogs little time to feast after a hunt. Lowland Forest areas, flood plains, semi-desert and montane environments are some of the many areas these animals have struggled to establish themselves and have largely been outcompeted by larger predators.

Wild dogs are pack animals and form groups consisting of a handful of individuals to near a hundred in some areas – overall the average is 6 adults per pack. They are known for their intricate social structure and the clever way it aids in their hunting and survival. They are led by a dominant mating pair who produce all the young and secrete a pheremone that prevents subordinate members of the pack from producing young. The dominant female is almost always pregnant or nursing pups – if there is a steady supply of food – though subordinate females also care for the young. Because they move around all the time and have large home ranges, their young may be left vulnerable to predation and other dangers if the whole pack goes off hunting. As a result, a group of females always remains behind to look after the young when the pack hunts. The hunting members bring back food for the young, females and weak members of the pack in the form of regurgitated food. Unlike other pack animals, wild dogs feed their young before anyone else, allowing pups to grow to maturity in record time.

A large part of their social behavior revolves around the hunt. Wild dogs are master hunters, with better success rates than any other African predator. They have intricate flanking and chasing strategies, one of which involves members taking turns to lead the chase, allowing other members to rest as they wait for their turn. This allows wild dogs to run for tens of kilometers without tiring. In addition, wild dogs are known to start eating away at their prey while it is still alive. This may seem like a cruel practice, however, this is mainly to maximize the amount of food they can get before being chased off their kill by larger predators. Wild dogs are also territorial animals. The responsibility of marking out the pack's territory falls to the dominant breeding pair, who urinate and defecate where they wish to set out the border of their territory, leaving behind scents other wild dogs will recognize.

The dominant pair of the pack start their mating courtship when the female goes into heat. The male protects her and keeps her away from the other males in the pack during this time, while both of them release pheremones that leaves subordinate pack members infertile. The courtship ritual starts when the dominant female urinates and scent marks the spot where they will mate, and the dominant male follows by doing the same. They then copulate for between 1 and 6 minutes at a time and sometimes also vocalize as they do so. Most births occur in the later stages of the rainy season, and mating between the pair occurs in intervals of a year to 14 months. Her gestation period – or period during which she is pregnant – is roughly 69 – 73 days long. Thereafter she will give birth to one of the largest litters of any canine on Earth – between 10 and 20 pups per litter. These pups are born blind and helpless, and will only open their eyes at around 4 weeks of age.

Wild dogs are some of the most predator-tormented predators in Africa, largely because of their small size. Lions and hyenas are the biggest worries for any pack of wild dogs. They often overpower the pack to steal their kill, and are known to kill wild dog pups when given the chance. As a result, wild dogs have developed the ability to make the most of a kill in as little time as possible. The two main strategies they employ are to start eating away at their prey while it is still alive, and to eat enough to be able to feed their young upon returning to their den with food that they regurgitate. This allows wild dogs to remain mobile and avoid danger as far as possible, though this is may not always be enough.

South Africa is an exceptionally diverse travel destination, from its cultures to its wildlife.

Travel to Zambia for an authentic African safari experience reminiscent of yesteryear.

Zimbabwe is renowned for its extraordinary view of the main section of the Victoria Falls.

Mozambique's tropical coastline on the Indian Ocean is rich with marine life.

The Sabi Sand Private Game Reserve is home to some of the most exclusive lodges on the continent, from Dulini to Singita.

Cape Town is a truly magnetic city and alluring for its unique blend of a laid-back lifestyle, the great outdoors and an electric city buzz.

The most sought-after destinations in the Garden Route are charming seaside towns like Knysna and Plettenberg Bay.