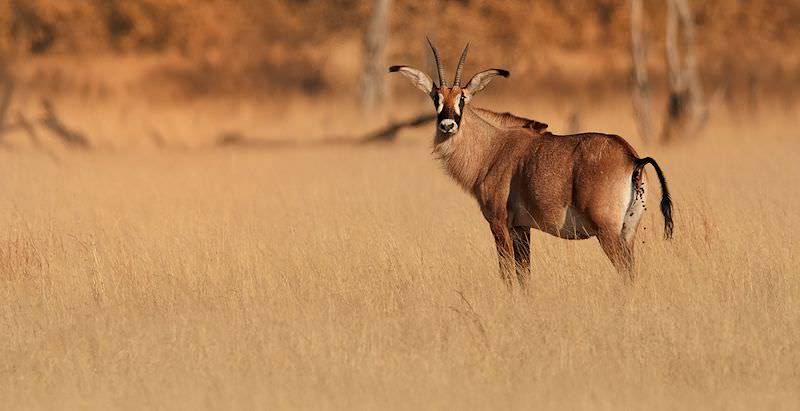 The roan antelope enjoys the woodland savannas of the wilderness areas of northern South Africa.

The Roan antelope, with its long, curled back horns, its distinctive black and white face and its noticeably long ears is one of the largest species of antelope found in Africa, with males reaching weights of up to 300kg (660lb) and females a high of 280kg (620lb). Their body’s fur is a mixture of tan and grey, fading darker down to their chest, knees and hooves which is a roan or reddish-brown color, hence their name. They also have short mains or overgrown hair around their neck and shoulders. They are sometimes confused with the Gemsbok because of the resemblance their respective black and white faces share. They can be distinguished by their horns, with the Roan’s horns shorter and curled back and the Gemsbok’s horns a bit longer and very straight.

According to the studies done for the UICN red list, the Roan Antelope is of least concern for endangerment and extinction. Due to expanding settlements in East Africa, the species has been eradicated from Gambia and poaching and loss of habitat is still decreasing its population annually. The total population of these antelope is at 40 000 individuals but declining. Strongholds in Southern Africa such as in the Kruger National Park have greatly helped to prevent the species’ disappearance in these areas, and have also helped to establish stable populations while the number of Roans in other countries has continued to decline, in some areas in West Africa up to 70% since 1998.

Roans are found in many tropical and subtropical areas with scattered trees and small shrubs, with longer streaks of grass rather than short grass. Dotted woodland, grassland and savanna areas within the Kruger National Park house most of the park’s Roan population, who prefer feeding on the newly grown tops of the medium height grass that makes up most of the vegetation in these areas. Again, the centre of the park near Satara and Orpen rest camps, with its large open plains of grassland, offers the greatest chance of a Roan sighting.

These shaggy looking antelope, like the sable and its other family members, form 3 main types of herds: maternal herds that consist of females and their young, as well as bachelor groups formed by only males or a mixture, where there is usually a dominant male among females. The maternal herds have a matriarch that leads them and makes up the top the hierarchy within this collective group of Roan, acting as the chief in charge of the rest. Males may be solitary, living on their own for the majority of the year rather than with fellow bulls, but may attempt to take over control of a herd from a dominant male, which would mean that he mates with the females in that herd.

Roan antelope are shy antelope and are not frequently seen on game drives or walks by humans, despite their healthy population. They are at their peak in social behavior early in the day when the sun has just risen and they can graze in peace. They are quite picky eaters and prefer not eating a variety of different things but rather sticking to their usual diet of medium sized grass. They too aren’t territorial and can also have quite the temper when their young are put in danger or when two bulls dispute over dominance.

Roans, unlike seasonal breeding antelope such as sables or impala, breed just about any time of the year from the time they reach sexual maturity and are able to produce healthy and strong offspring. They too hide or conceal their young in the luscious tall grass they feed on for a few weeks after birth to protect them from the viscous-natured predators they will be running from for the rest of their lives. Mating takes place between a dominant male in a herd and the females in that herd, although males may battle it out for mates and for supremacy.

Roans are relatively slow animals, but find themselves not suffering that much when it comes to predator attacks and kills. This may be due to their size and their aggressive and effective self-defense behavior towards their natural enemies who prey upon them. Lions are the only predators that regularly pester Roan populations, although crocodiles and spotted Hyenas have also contributed. Roans snort and rapidly adjust their posture to ready themselves for flight or attack when the threat of a predator wonders their way, but because the distribution of Roans and predatory animals such as Lions don’t coincide much, they aren’t put in this position as often as other antelope species.

Travel to South Africa for a wide range of adventures during your vacation.

Travel to Namibia for a range of thrilling desert safari activities.

Zambia is an underrated and under-explored safari destination.

Travel to Zimbabwe for an exceptional view of the world-famous Victoria Falls.

Mozambique is a tropical paradise of stunning beaches and islands.

The Kruger National Park is a vast wilderness area stretching across two million hectares of Lowveld in northeastern South Africa.

The Sabi Sand Private Game Reserve is an alluring destination with a handful of exclusive four and five star safari lodges.

Cape Town is a cosmopolitan, world-class city surrounded by awe-inspiring mountains, vineyards and the Atlantic Ocean.

The Garden Route is a verdant corridor that connects the Western and Eastern Capes in South Africa.