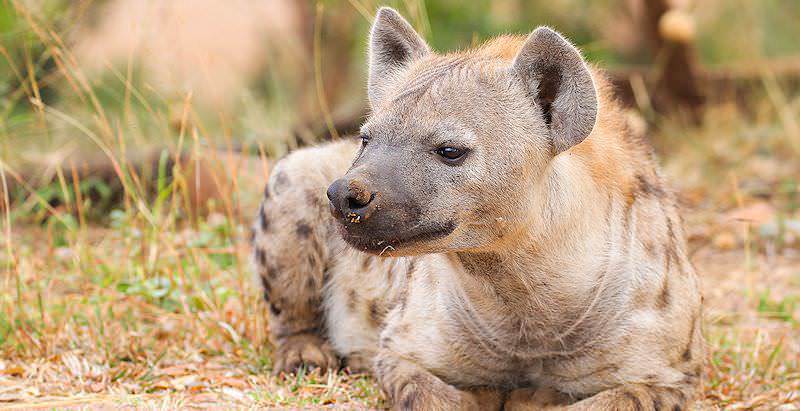 Though known for being scavengers, spotted hyenas are also highly efficient predators.

Spotted hyenas are a light, dull brown color, with darker dots or spots that have given them their name and also helped them to camouflage in the long grass of Africa's savannah areas. They are quite large and are some of the most dominant predators and scavengers of our grasslands, with males weighing between 40 and 55 kg (88 and 121lb) and females a bit larger at between 44,5 and 63,9 kg (98 and 141lb). Hyenas are renowned for their bite force, which can crush bones, allowing them to extract nutrients from a carcass many other predators have already abandoned, which gives them an added advantage when prey is scarce.

Spotted hyenas are very widely distributed within Sub-Saharan Africa, with the only major exclusions being the heart of the rainforests of the Congo and the coast of West Africa, along with scattered areas of Namibia and Zimbabwe further south. They are also absent within the largest part of South Africa which includes the Cape Provinces and mainland areas where agriculture has taken over much of their former habitat – a problem many species throughout Africa face. Be that as it may, they are continuously found from northern South Africa right up to parts of Sudan on the East side of Africa –a large range when compared to other predator species in Africa.

Spotted hyenas are the main scavengers of the African plains, alongside vultures and jackals. They are very common and are currently in no danger or threat, though their numbers are rapidly decreasing. Poaching and habitat loss are the main causes of the decrease in their populations in recent years. On the positive side, their wide range of distribution does mean that the species is less vulnerable to extinction in the future, with most areas lower than 4100m occupied by hyenas. Their total population size is estimated at between 27 000 and 47 000 individuals, of which around 1 300 to 3 900 can be found in the Kruger National Park. An early morning or late afternoon drive in the park may result in a heyna sighting, especially around Letaba and Olifants rest camp.

The spotted hyena is one of the main characters in the epic events that occur on the great grasslands of Africa, where big hunters and big prey battle it out in the endless struggle for survival. This is where they flourish in great numbers, although they are sometimes found in smaller areas woodland, grassland or savanna and bushveld areas, where they hunt more often due to the lack of big kills. When given the choice, they do however avoid situations like these, preferring to play the role of "beta" on the great plains. They consume the most meat of all hyena species, and rarely adopt an omnivore's diet, despite being able to when the need is great enough.

They take up the role of bottom feeders, scavengers and runner’s up to great prides of lions in a typical intense African battlefield found on the great plains and grasslands. In areas where lion populations have been depleted the tables have since turned, and spotted hyenas have indeed become the primary hunters. They form large clans of many individuals of which the majority are female and are all led by a matriarch or dominant female hyena. They all live together in a series of shelters collectively called their den, though rivalries between clans and the battle for territory may cause a clan to have to find a new den. They are less community-run when it comes to raising young, with every female seeing to the health and wellbeing of her own cubs only, rather than one large communal effort to raise young often seen amongst wild dogs and lions.

Hyenas form groups known as clans, but are still territorial and spend a portion of their time on scent marking and protecting their clan's territory. Scent-marking is usually done through defecation and pasting. Rival clans will compete against one another for the spoils of a kill, with confrontations often getting violent. They also have a unique way of greeting where members sniff each other’s behind, a practice that is done as a kind of ritual greeting or means of identification. When competing for kills or communicating over a distance, hyenas send out their signature laughing sound, while keeping their head faced to the ground as they do so. This whooping sound has many variations, with differences in pitch and rhythm, and is one of the few vocal means of communication among hyenas.

Spotted hyenas reproduce at any point throughout the year, after females go into heat for a 2 week long period. Both males and females reach sexual maturity at around 3 years of age. Their pre-copulatory rituals are not of the glamorous kind. Males generally get the confidence to mount a female and are either met by an aggressive response where the male then either continues or stops and moves away – mating is not always entirely consensual. After a female conceives, it may take up to 132 days for her to finally give birth to her litter of new clan members, ranging from 1 to 4 pups – usually 2 on average.

Spotted hyenas are not generally tormented by the thought of predators or attacks, but they do face competition for kills and meat from other large predators like lions. Spotted hyenas are usually the ones that make a nuisance of themselves as they attempt to steal a kill, and so, often face backlash that could result in serious injury or death – especially at the hands of an annoyed male lion. They often steal leopard, cheetah and lion kills if their numbers are enough for them to prevail, and sometimes get themselves into epic battles in dry periods when food is a scarce commodity because of this. Their main strategy when defending opposition is to gang up on them in numbers, a method called "mobbing". This, however, is only ever really effective if they have the upper hand in numbers.

Zambia is home to safari areas like South Luangwa, Kafue and Lower Zambezi.

The Sabi Sand Private Game Reserve conserves 65 000 hectares of pristine lowveld along the border of the Kruger Park.

The Garden Route region stretches from Mossel Bay in the Western Cape to Storms River in the Eastern Cape.