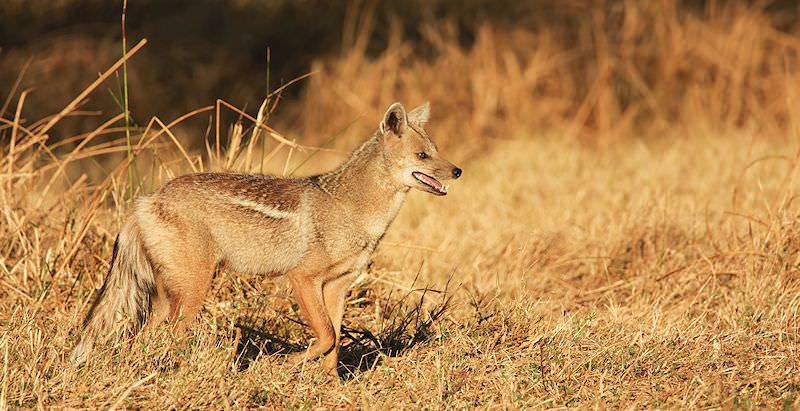 Side Striped Jackals look very similar to black backed jackals at first glance. They are however a slightly duller color all over, with the border between their red brown fur and grey fur on their back a silver or grey color compared to the vivid black of the black backed jackal, giving way to their respective names. The transition between the colors is also more gradual and slowly gets darker phase by phase. They are slightly larger than their relatives reaching weights of between 6 ½ and 14 kilograms on average (14 to 31lb).

Side striped Jackals can be found within in some parts of Southern Africa, starting in northern South Africa and ranging into Mozambique, parts of Botswana, Zimbabwe and northern Namibia bordering Angola. More north they can be found into the Congo in the middle of Africa and across the Tanzanian and Kenyan landscape in addition to parts of Sudan, while also ranging more east into Eastern Africa on a narrow streak on the edge of the Sahara. They are widespread but not an easy sighting in the Kruger National Park, and are the less common of the two jackal species found in the park.

When only considering the Kruger National Park, these animals may seem to be fairly rare and not particularly widespread, but in actual fact they are both of those things. Their range starts more north than that of the black backed jackal. They too are listed as least concern by IUCN, with the trend among most of their populations also that the species is stable overall. Their populations are greater in more northern Sub-Saharan African countries, but their population density remains low, recorded at a mere 0.7 individuals per square kilometers in Senegal and a high of 1 per square kilometer in Zimbabwe.

Side striped Jackals are the most easily pleased jackals environmentally, and are found in a range of different habitats, even in the Kruger National Park. They are the only jackals to be found in the Miombo woodlands of Zambia, and also reside in parts along the edge of the rainforest. Montane woodlands, grasslands and savanna areas in addition to marshes, providing these areas have enough cover for them to use as shelter. They too are omnivores and regularly feed on wild fruits along with their known diet of small mammals and dwarf antelopes. Insects also provide them with enough sustenance to feed on them consistently, most notably termites and grasshoppers.

Little is known about the way members of this species organize themselves, mainly due to the lack of proper studies, but they are thought to closely resemble the other 2 main jackal species in this regard. They too form single and permanent pairs which share a substantial sized territory in which to live. Groups, almost always families, are averaged at 6 members all living on this territory, although it may range to as much as 8 or even 12 members. They all accompany each other to the kills of other animals where they scavenge, or to areas of denser vegetation to forage for other foods.

Young are born in the rainy season in the months of August through to January, unlike the black backed jackal who usually gives birth to young at the start of the dry season. They also have a slightly longer gestation or pregnancy period and thus have a completely different mating season. Litter sizes are also thought to be around 4 pups, although all of them might not survive to adulthood. Their courtship and rituals prior to breeding is not known in such depth as black backed jackals or golden jackals, but it most likely entails the same kind of structure and activity as that of its fellow species.

Side striped Jackals have similar dangers, similar strategies and similar foes when compared to Black backed jackals. Any larger predators such as lions, leopards and even hyenas or wild dogs pose a threat to young in particular. They are less carnivorous than both other jackal species, and usually avoid contact with predatory animals since they have no need to do so. Pups are protected by adults from birds of prey, and flight is the main objective when any larger animal threats the health of a group or any member anticipates such behavior.

Travel to South Africa for the diverse African vacation of a lifetime.

Travel to Namibia for a series of desert-oriented safari adventures.

Zimbabwe is best known for the awe-inspiring sight of the Victoria Falls.

Travel to Mozambique for an unforgettable African beach vacation.

The Greater Kruger National Park offers some of the most prolific game viewing opportunities in Southern Africa.

South Africa's Sabi Sand Private Game Reserve is home to the Big Five and a diverse wealth of other species.

Cape Town is sought-after for its cosmopolitan atmosphere coupled with its remarkable natural beauty.

The Garden Route caters to a wide range of travel pursuits, from relaxing on fine beaches to leaping off the highest commercial bungee.